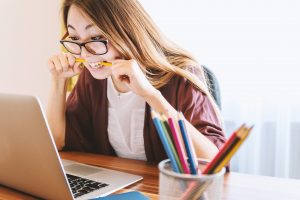 “Been There, Done That”

As I sat in the workshop I had paid hundreds of dollars for, one of my fellow attendees raised his hand and asked the famous instructor how many screenplays they had written. The instructor answered, “Oh, I’ve never written a screenplay…but if I wanted to, I could.” My jaw dropped. I wanted to shout out, “Could you?” Needless to say, I felt duped. Then I thought back, none of my other teachers had written screenplays…but they certainly felt they had the authority to explain how to write one. It made me angry because I realized none of these teachers had spent time stuck on page 65, or had attempted to get their catalyst to hit exactly on page 12. I decided to focus on reading books by or taking workshops by people who had actually been in the thick of it.

Cut to about 15 years ago, this young lady, named Betty had decided to write a screenplay with her friend Carinn (soon to become the writing team known as Dos Divas). She didn’t know how to format her screenplay and ended up using a stage play format. Then, not knowing what to do next, they printed it out, inserted their two brass brads, and marched their screenplay to the Northwest Screenwriters Guild where they met Wally at the door. Wally, being the helpful soul he is, asked, “Is that a screenplay?”

“How could you tell?” Betty asked. They laughed and an instant friendship was formed.

Betty replied, “I can take it,” and she handed it over.

He looked at it… looked at her… then said, “It needs a little work but I can help you with this.” He said that, because, he had “been there, done that.” He had spent years studying and writing. Learning, not only from other great writers, but from the daily grind of writing screenplays himself.

Guess what? Betty was like a sponge and he appreciated that she was able to take direction and learn the RULES. Oh, yes, there is a formula for writing a screenplay. (Betty loves to call screenplays the Haiku of prose). Now, Wally and Betty teach and write together.

Why am I telling you this?

Well, if you are reading this, you may be either a writer, or a want to be writer, who wants to learn how to write a screenplay (or a query, or emotional prose, or any of the other skills that writers need). Again, let me say (and Betty will join me in saying), “Been there, done that!”

Finding the right teacher isn’t easy. Oh, there are a lot of teachers out there to choose from, but the question you have to ask is, “Which one is best for me?” Of course, we think we're the best screenwriting teachers out there!

But what should you look for in a teacher?

Look for a teacher who has paid their dues and who understands what you are going through.

Wally was fortunate enough to have studied under Stuart Stern (who wrote Rebel Without a Cause), not once but twice (University of Washington and The Film School) and later, have Stuart as a friend and mentor. Wally has now won multiple screenwriting awards and produced several pieces, with several in the works. Betty has taken numerous classes and workshops from writers and teachers, the most notable being Blake Snyder, author of Save the Cat, whom she was lucky enough to study with on multiple occasions. Blake Snyder had written over 75 screenplays, had two sold for over a million dollars, and had two produced. She and her partner listened to him, wrote their next screenplay, and were optioned within six months. She was then lucky enough to have him explain her pitching method in Save the Cat Strikes Back.

The point I’m making is, Wally and Betty have paid their dues… they have spent time, learning to write screenplays, from great screenwriters. Wally has read, taught, and consulted on 100s of screenplays, both in the NWSG and as a teacher. Betty was the Head of Compendium at and former president of the NWSG, so she has written and read multiple screenplays.

Look for a teacher that is encouraging.

Most importantly, Wally and Betty know how to play nice. They will make you laugh as they bleed all over your screenplay with their favorite red pens. One thing they both do is collaborate with multiple writing partners. It’s hard to share your baby with a friend, but they do it on a regular basis. Again, you may be asking, “Why are you telling me all of this?” My answer is simple, finding the right teacher is important!

The advent of the internet made it possible to easily find, not one but a myriad of folks out there who will gladly show you how to write a screenplay. And the Covid epidemic has birthed a plethora of people who have decided to try their hand at writing screenplays. This combination has birthed a huge cottage industry, to fill the needs of all the new screenwriters-to-be. Screenwriting teachers, ready to teach you how to create the next Oscar or Emmy winner! Some of these “teachers” are screenwriters who have paid their dues, spent time in the trenches... learning to write… then rewriting draft after draft, until they got it right. But there are also many who have never written a screenplay, never paid their dues, never learned the rules… I think you get the picture.

Look for a teacher who has a track record of helping students succeed.

Both Betty and Wally have adapted novels. There are definite rules and you need to be aware of them. How do you take 300+ pages and condense it into 110 max? How do you take your series you’ve created and turn it into one, single, 110 minute move? Wally and Betty can tell you it doesn’t come easily, nobody’s born with the knowledge, you have to learn it. And they will also tell you it’s worth it… completing a screenplay that pops, that hits all the beats… and then the rush you feel when it comes to life on the screen? It doesn’t matter if it’s a short or a feature, an indie in a film festival or an Oscar winner!

Screenwriting is not easy… but if you want to apply yourself to study hard and learn the rules you’ll have a chance at being successful. We are pleased to announce one of our students from our last Intro to Screenwriting just had her movie picked up that she adapted from her published novel. That’s why the trick is finding a teacher that’s, “Been there, done that.”