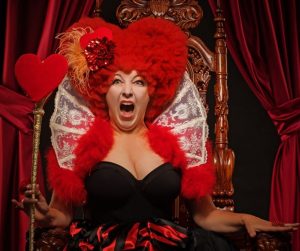 Off with Their Heads!

Have you noticed that there is a Proliferation of Uppercase letters being tacked on Willy-nilly to all sorts of Words for no logical Reason? As an Editor, I run into this problem a lot. It’s almost like we’ve time-traveled back to the eighteenth century—and if you don’t get the reference, check out a few sentences of a transcription of the Declaration of Independence, in which the Tyrant of the day was Refusing his Assent to Laws, obstructing the Administration of Justice, and making Judges dependent on his Will alone—apparently bad grammar tends to repeat itself.

Where does this obsession with random uppercase letters come from? I started to say I don’t know, but I think I do. Capital letters imply importance. Everyone’s perception of importance is unique. And people will—consciously or subconsciously—capitalize the things that feel important to them.

The meaning of capital, as etymonline.com states at the beginning of this post, originates from the concept of “head…main, principal, chief, dominant, first in importance.” I didn’t know that before I wrote this post, at least not in reference to letters, but its title had already floated into my head, reflecting my knee-jerk response every time I ran into an inappropriately uppercased word: "Off with Their Heads!" On a hunch, out of curiosity, I looked up the etymology of capital and thought, Of course. Serendipity. Good job, Intuition.

Anyway, you get the point: too many Capital Letters! (Okay, I’ll stop that now. It really is Annoying.)

Which of the following excerpts are capitalized incorrectly?

The quick answer is “All of the above.” All of them, in most contexts, are wrong.

Which of these would you, as a writer or an editor, allow?

And my answer is, “Possibly all of them, in certain contexts, but it depends.”

Besides knowing the rules—in the world that most of us work in, trade books, The Chicago Manual of Style (CMOS)—writers and editors need to bring professional objectivity and an awareness of nuance to the table when editing or proofing a manuscript.

I recently edited several manuscripts that presented some difficult decisions about excessive capitalization. Writers and editors need to be aware that there is nuance in these matters. After spending uncounted hours going over a particular manuscript, painstakingly eliminating a ton of unnecessarily capitalized generic references to military officers’ ranks, positions, and job titles like “Center Director,” I was becoming increasingly more uncomfortable with strictly following the rules of capitalization as laid out in CMOS.

Chicago’s general rule recommends that “Civil, military, religious, and professional titles are capitalized when they immediately precede a personal name,” but, “In formal prose and other generic text (as opposed to promotional or ceremonial contexts or a heading), titles are normally lowercased when following a name or used in place of a name….”

However, its exceptions to the general rule says, “In promotional or ceremonial contexts such as a displayed list of donors in the front matter of a book or a list of corporate officers in an annual report, titles are usually capitalized even when following a personal name. Exceptions may also be called for in other contexts for reasons of courtesy or diplomacy.”

That last sentence was the one that hit home. As it turned out, the publisher was uncomfortable with it, too. We discussed it and considered several things unique to this particular book:

Based on the bolded quote, above—for reasons of courtesy and/or diplomacy—we decided to make exceptions customized to the book we were working on. We came to an agreement that we would continue to lowercase things like rank and position—e.g., lieutenant, or center director—when they were used generically, universally, or nonspecifically: “A lieutenant was assigned to this duty.” “Every center director was accountable.”

But when referring to a specific person, we would capitalize: “The General was offering me my dream job.” “The Center Director was pleased with the changes we recommended.” We both felt comfortable with these compromises.

So, after consulting the author, and after my uncounted hours spent lowercasing such terms per CMOS, the publisher and I spent upwards of 13 long hours over two days one weekend, on Zoom, painstakingly looking through every page of the already-designed layout of the 100,000-plus-word book in InDesign, and reversing hundreds of the changes I had originally made to reflect the new style decision. We added comments explaining our reasoning to the Publisher’s Notes in the front matter and sent the manuscript to the printer with a clear conscience. Two clear consciences. There is an adage about the necessity of knowing the rules in order to know when to break them. Very few things are set in stone; there are always exceptions, and thoughtful fluidity means you don’t necessarily have to break a rule if you can just bend it a little. A great deal of nuance goes into getting just the right words onto the page. But, if done thoughtfully and with care, it should result in a smoother, clearer, more satisfying experience for the people you are writing for—your readers.

Lori Brown has made her living as a professional editor since 2001.

Lori has good literary instincts and an excellent ear, a solid grounding in grammar and punctuation, a strong sense of syntax, and a deep feeling for the rhythm of writing. She's one of those hopeless nerds who likes reading the dictionary. She is a passionate believer in the serial comma. She knows the rules and when she doesn’t, she looks them up. Sometimes she uses sentence fragments or begins sentences with And–or both. She has even been known to end a sentence with a preposition because sometimes, a preposition is the best thing to end a sentence with. But the most important thing for clients to understand is her bone-deep conviction that your book is your creation, not hers. She is absolutely adamant about preserving the author’s voice and intent.

Writing is important. Lori believes that good writing can change a life—or change the world. She also believes that every writer needs a good editor—even great writers. Even editors need editors. Because good editing makes good writing better. One red-penciled word at a time.

What people say about working with Lori:

"… getting a misspelled word past her is like trying to throw a pork chop past a wolf." — Dale Cramer, Author

"Lori is like a warm, snuggly blanket of safety on a cold winter’s night." — Lisa Norman, Heart Ally Books

"… her command of her profession, attention to detail, and admirable work ethic combine to create the best kind of collaborator. " — Elizabeth Perry Spalding, 21 Skye Design

"…a godsend in building my new business, giving me confidence in a no-nonsense, reliable, and honest copyediting resource for my book projects." — John H. Clark IV, Old Stone Press