The Psychology of Storytelling

Who experiences? The mind does. Hence, writers need to know the psychology of experiencing and apply that to stories.

We experience two worlds, the internal and external world. We are Janus, the two-faced god, who dwells on the threshold between the two worlds.

We imagine, dream, feel, and think in the internal world. The internal world defies physics. We can fly without wings, dive without gills, and shapeshift. It’s a merciful world because there are no limits to our imagination and we always get a second chance. It’s the place where the magic happens.

The same is true for stories. Stories have internal and external developments and writers need to tell the difference between the two, which is not always easy. Let’s take love and romance as an example. Usually lumped together, a romance is the external arc of a relationship, and love is the characters’ internal experience - besides infatuation, passion, or obsession.

Dwight V. Swain put great emphasis on this rhythm. He came up with the concept of Motivation Reaction Units, MRUs. These are the rules:

MRUs are real to life and we go through MRU cycles a hundred times a day. For that reason, readers will notice when a writer gets it wrong, for example, by reversing motivation and responses, or by getting the internal response sequence wrong.

Our senses turn external experiences into a multimedia stream and project that onto the brain’s frontal lobe, which our self watches just like it watches TV or reads stories.

We have a natural ability to put ourselves into other people’s shoes, although we may not use that ability often. This ability is called empathy. Empathy is the root story engager. No empathy, no curiosity, neither tension.

Narrative and POV emulate the self.

Emotional-visceral responses are involuntary and come first (see above). Big and fast-approaching objects trigger fear. So does standing at the edge of a precipice. Without emotions, we would look at an approaching lion and we would be like, “Wow! Awesome! Beautiful!” And we would be dead.

The border between pleasant and unpleasant is fuzzy. Some people take pleasure in pain. Sometimes, we like to flirt with unpleasant emotions, for example, by going bungee jumping or parachuting.

In stories, we conjure emotions with prose - by writing internalizations. Every genre promises a particular emotional experience, for example, horror stories allow readers to flirt with fear and disgust, romance promises love and infatuation.

Intellectual responses are voluntary and come third in MRUs. The intellect analyzes experiences, ponders their meaning, comes up with solutions to adversity, and anticipates the future.

The cognitive response to stories is curiosity. Curiosity is a major story engager. Crime stories make amply use of curiosity. Writers need to design curiosity. They do that with plotting: by raising and answering story questions, as well as adding twists and clues and red herrings.

The brain continuously tracks the discrepancy between motivation and reality, for example, the motivation of finding food and its availability. Such discrepancies produce tension. Tension is a major story engager.

Writers are alchemists. They concoct endorphins, adrenaline, norepinephrine, cortisol, oxytocin, and serotonin in their readers’ brains.

We can be curious and frightened at the same time, for example, when we go parachuting or meet a snake in the woods.

Take your protagonist to such conflicting moments to boost tension.

The brain and the nervous system conjures emotions with the help of the spinal cord and five more nerve centers in our body: at the base of the spine, behind the navel, at the solar plexus, at the heart, and in the throat.

In case of a dangerous or tempting situation, the brain will issue hormones that induce the spine and other nerve centers to summon particular bodily sensations that represent emotions.

Knowing the places where the body makes up emotions and what kind of physical sensations represent them helps to write engaging emotional-visceral responses.

Since different emotions can make themselves felt at the same location (see the above example of a lump in the throat), you may want to indicate the emotion with a tiny tell (tell underlined): My heart pounds with fear, usurping the space my lungs need to breathe.

Stefan writes inspirational non-fiction, visionary fiction, and runs an online enlightenment workshop. Enlightenment and storytelling have interesting parallels, which enticed Stefan to write a book about storytelling - The Eight Crafts of Writing. Stefan was born in Germany and, after graduating, enjoyed two years backpacking in Australia, New Zealand, and South-East Asia. Back home, he studied general electro-technology and pursued a career as a sales and business development manager in Europe, Middle East, and Asia. Semis-retired now, he lives with his son in the Philippines. 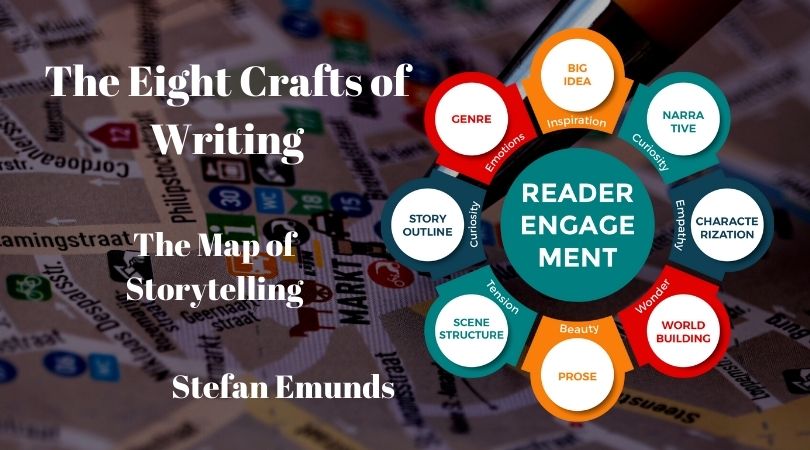 The Eight Crafts of Writing

Do you want a structured overview of the writing craft(s)? Are you interested in learning...