Using Story Structure to Build a Novel Quarter by Quarter

Writing a novel is like hiking up a mountain with a backpack loaded with rocks. Each rock is an essential part of your story. These include plot, characters, setting and much more. But working with them all together, in relation to the whole story, can become overwhelming.

After I discovered four-part story structure, I realized that I could focus on only one quarter of the story at a time. This mindset transformed my writing process. Working with these large chunks of the story feels much more manageable. Think of your story as a four-paned window instead of one made from a single, large pane. A crack in one of the smaller panes is so much easier to fix than feeling like the whole single, story pane has been shattered. Together, these four panes make a much stronger whole.

Zooming In and Out

During the writing process, writers must zoom in and out of their story. We often begin with a big picture or high-level overview of a story. That way, we can decide what genre(s) our story fits in. Once the genre is identified, we are able to decide what other core elements best fit to create a powerful story on a big picture or macro level.

The opposite is to zoom in to the micro level. If you’ve taken a Margie Lawson class, you’ve likely learned sentence level techniques like Rhetorical Devices, EDITS System highlighting, power words, and backloading. There are many other ways to strengthen your story at this micro level.

Focus at the Middle Level

Four Part Story Structure gives us an additional level to work on. We don’t just have to zoom all the way out to the big picture or all the way in to sentences and paragraphs. There is a Middle level within each story quarter. I call these quarters Zones.

Each Quarter is Unique

Each of these story quarters has its own function and flavor. I could immerse myself in one Zone of the story at a time, and not be overwhelmed with having to consider the total story all through the writing process.

Each Zone has specific Landmark scenes or elements that must be included based upon the genre of your story. The functions of each Zone differ to meet reader expectations as the story evolves. The character and plot are tightly woven together to keep the reader turning those pages.

Armed with all this new knowledge, I created my Story Structure Safari class to introduce other writers to this powerful process. My next class will start April 1st. What follows is a sample of the Safari class.

The Power of Four-Part Story Structure: The Zones

Each Zone has its own purpose and personality.

The same is true of our hero moving through the four zones of our story. Her behavior and the obstacles she will face will be different in each zone and impact the need to change.

The Protagonist in each Zone is related to an archetype.

A Brief Overview of the Zones

We’re going to start at the bottom left in Zone 1. Then go up to Zone 2. Next, go right to Zone 3 and then down to Zone 4.  Starting at the bottom and going up, then continuing down after passing the midpoint follows the traditional story arc shape.

Zone 1 is approximately the first one-fourth, or 25 percent of your story. Here we meet the protagonist in her ordinary world. The main mission of Zone 1 is to Set up the Conflict and everything that follows.

Zone 1 is yellow, which symbolizes caution. Something big is about to happen and change everything.

Think about Tom Hanks’s movie Cast Away. Zone 1 shows Chuck focused more on his Federal Express job than his relationship with his girlfriend or family. A plane crash twists the story into a whole new direction.

Chuck is separated from those he loves by choice. He is motivated to work, work, work. His experience of being an orphan is mostly self-imposed until washing up on that deserted island. Then, he is orphaned by circumstance.

In Zone 1 of Die Hard, Bruce Willis’s John McCane is flying in from New York to L.A. to see his family at Christmas. After terrorist robbers take over the building his wife’s business is in, there will be no typical family vacation.

McCane has been orphaned by a marital separation and physical distance from his wife and kids. He too was more focused on work than family and home. After the terrorists take over, he is orphaned from the support of his familiar police force.

Zone 2 is the second fourth of your story and ends at about the 50 percent point. At the end of Zone 1, the story takes a turn, and the protagonist is thrust out of her Ordinary world into a new, Exotic world in Zone 2. This is where the real story begins.

The main mission of Zone 2 is to show the hero’s Reaction to plenty of testing in the new journey. Zone 2 defines this journey and establishes the stakes and goal for the remainder of the story.

ZONE 2 is colored blue, because blue symbolizes uncertainty, in a fog—clueless how to handle this new situation. The Wanderer hero hasn’t had time to experience and learn and change. It is the situation that is different when we start this section of the story.

After surviving the plane crash in Cast Away, Chuck is alone and bumbles along learning how to survive on a tropical island. Chuck’s Wanderer is washed ashore in a literal Exotic world. He has no clue how to survive with no tools or other people in a place he knows nothing about.

In Die Hard, McCane escapes to an upper floor without his shoes and only his handgun for protection after the terrorists, using all sorts of automatic weapons, take everyone in the building hostage. He must figure out how to save his wife and her coworkers in an empty skyscraper, in a strange city, on Christmas Eve.

John is used to being part of large police force fighting crime for the people in New York City. Now, he is a Wanderer alone and outgunned in a strange building with the woman he loves and many others in extreme danger.

Zone 3 is the third quarter of your story or starting at about 50 percent and ending at approximately the 75 percent point.

The hero passes from Zone 2 into Zone 3 at the Midpoint. Dramatic action or new knowledge causes a shift in the protagonist’s internal awareness, which encourages him or her to take action, attack the problem. A writer who understanding this shift in mindset and action helps is less likely to struggle with a “sagging middle.”

In Zone 3, the protagonist is able to see more clearly what he or she needs to do to reach the plot goal and resolution. And it involves change for the protagonist—his/her character arc continues to take shape. She begins to react differently to what you—the author—has thrown in her path. This zone is an opportunity to show the hero’s potential but also that there is still work to be done.

ZONE 3 is colored PINK (highlighter version of Red), which symbolizes lifeblood, action. Think Pink Panther on the prowl or “I am woman, hear me roar.”

In Cast Away, Chuck’s Warrior realizes, after years of no opportunity for rescue, his only hope for reconnection to his world is to build a raft and set sail with only the barest hope of survival.

In Die Hard, McCane’s Warrior throws a dead body out of the building and onto the police car below to alert them that something horrible is going on in the building. Once McCane and the policeman begin talking on the walkie-talkie radio, we know they can work together to get the bad guys.

Zone 4 is approximately the last fourth of your story.

In Zone 4, the protagonist faces her greatest challenge. The hardships and obstacles the hero has had to endure throughout the story have strengthened her inner courage and determination. This enables the hero to reclaim the part of herself that had been lost, shed her fatal flaw behavior and fight to resolve the conflict and reach her goal.

Chuck is rescued but returns, after being gone four years, to find that his girlfriend is married with two small children. His Martyr must let go of the true love that helped keep him alive on that island and deal with the grief for his lost dreams and decide where his life will go from here.

McCane realizes that the roof is set to blow up and rescues the hostages. His Martyr then risks his own life to save his wife and the hostages from the bad guy. He has learned how important family is to him and he and his wife are able to reconnect and go see their children.

Each Quarter Helps Build the Others

The creation of Zone 1 informs the writer of what Zone 2 may need to be to move the story forward. Zone 2 then illuminates what Zone 1 has to do to best set it up. Once we see the Exotic World in Zone 2 we can better see what the Ordinary World of Zone 1 needs to be.

Each quarter of the story has to set up the next quarter. Writing that next Zone gives the writer a way to check how effective a job the previous Zone does to launch into the next Zone.

A Framework for a Compelling Novel

Envision your story as that four-paned window. If any of the Zones of your story is “cracked” you will know what to work on to fix it after learning about them in detail in Story Structure Safari. Even if it’s putting some masking tape over the crack for a while. As you work through the Zones of your story, you will discover what isn’t working in previous Zones and what doesn’t pay off in subsequent Zones. Then you’ll understand what needs to be done to keep the characters and plot potent and interesting throughout the entire story. Join me in Story Structure Safari in April. I’ll help you understand and use these zones to make your plot Die Hard strong.

Lisa Miller retired from teaching and counseling after 30 years. While she loved writing YA fiction, she has been drawn back into teaching. Not always finding the writing classes she needed; Lisa scoured the internet and how-to books for self-instruction. She funneled that knowledge into the creation of the Story Structure Safari class and merged it with her master teaching skills and experience with different learning styles. This is her ninth year to teach the class and she continues to update materials and expand her knowledge to best meet writer needs. 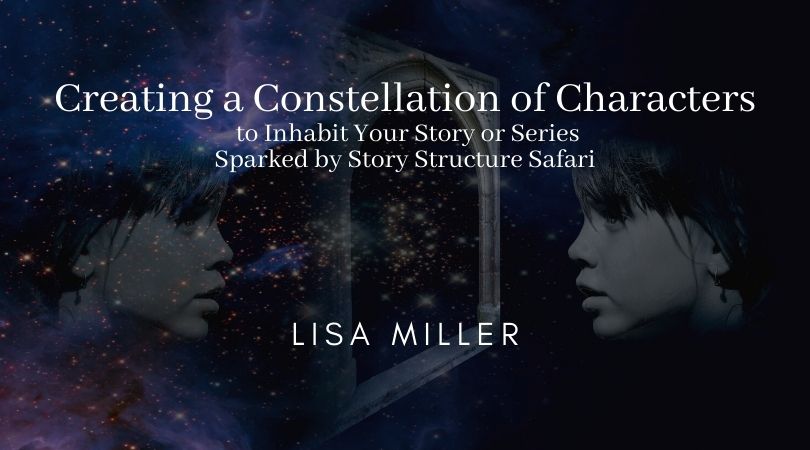 Creating a Constellation of Characters to Inhabit Your Story or Series 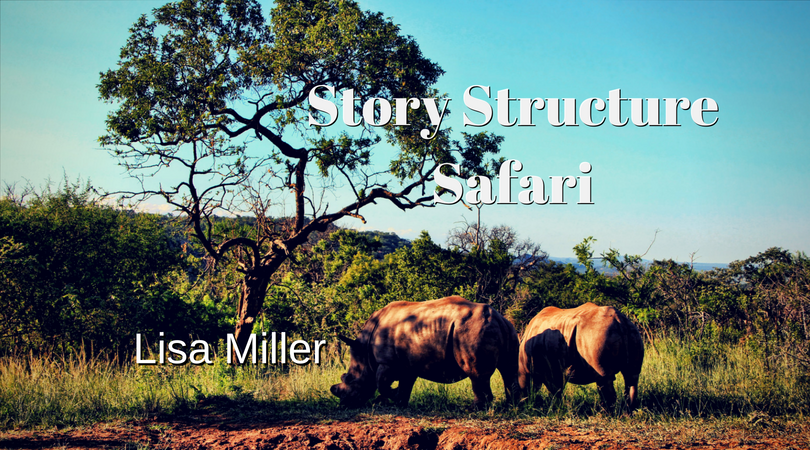 Beautiful words and exciting scenes aren't enough to propel the reader through a novel. Stories need a plan, a focus, a solid structure from beginning …
Read More
Share: