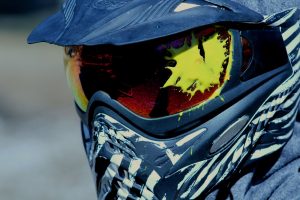 Most authors must do some book research to write a believable, compelling story. Historical authors might look up old newspaper articles, visit museums, or collect antique books from secondhand bookstores. Paranormal and fantasy authors may read up on mythology and magic or seek eyewitness‖ accounts of alien, ghost, or paranormal creature sightings. Romance suspense authors joke that their search history on weapons and dead bodies makes them targets for NSA surveillance.

What does a young adult contemporary author do?

Well, let me tell you about the time I played paintball—all for the sake of my craft.

The Limits of Online Research

I wanted to set one scene at a paintball game, so I went online and looked up paintball terms and equipment. Then I watched video after video of people playing. But that didn’t feel like enough.

To write the scene in deep point of view, I wanted to hear shots fired up close, feel the pull of the trigger, watch the paintball soar. I wanted to describe in my own voice what it felt like to be hit by a paintball. I needed to play.

The Help of Friends

Thankfully, I had two teenage sons I could draft. They had no choice. Not that they would have said no to Mom paying for a day of paintball!

We then invited friends from our church’s youth group and ended up with myself, our youth minister, and seven teens ready to shoot each other over and over with dime-sized paintballs.

Several rounds later, I had a much better understanding of how to describe my scene. Yes, it stings to get hit! But unlike the rubber band snapping description I’d read online, I could feel the roundness of the hit, more like a marble being shot from that rubber band. The guns made a thwop sound up close but a click sound far away. The rented masks smelled musty and sweaty, and their visors were dusty and scratched. And while I had expected to prefer the field with wooden barriers and trees, our whole crew favored the football-sized field with inflatable bunkers.

The Result of My Efforts

Shots fired, and the game began. Our team yelled back and forth, coordinating and taking out two opponents in quick succession. I ran full-forward, then slid Supergirl-style onto the patch of ground blocked by low-rise bunkers. Coming up on my knees, I fired again. Another opponent took a paintball in the stomach, lifted his gun, surrendered.

Behind me I heard Rachel holler, “Cover me!” I turned back in time to see Hunter exploding paintballs from his gun, swirls of vapor rising from the gun barrel.

My girl ran for the center bunker, lifted her gun over the chest-high wall, and took out an enemy just feet away. Hunter stopped firing and stared at her.

He probably expected good shooting from me, but Rachel had that timid thing going. People wouldn’t guess she’d come to the gun range with Dad and me a few times and proved a helluva shot—a natural.

Thwop thwop. A splat hit Hunter square in the stomach, and paint spread across his vest. That’s what you get for taking your eyes off the game. He sighed and walked off the field, surrendering arms in the air.

And in case you’re wondering, yes, I had fun! In fact, I went a second time when the youth group wanted to play paintball again and needed another adult to “chaperone.”

The Value of Experience

Of course, you won’t need to personally experience all aspects of your story to write it well. We have so much information at our fingertips these days. We can find people to interview about their experience (I guess I could have just asked a bunch of teens to report to me). We can imagine what things are like based on similar experiences we’ve had.

But it could be worth leaving the cushy office chair or the Starbucks table and venturing out for some hands-on book research. Sometimes the best alternative really is been there, done that.

Although if the there you choose is paintball, be forewarned that you could walk away with a nasty bruise on your thigh. I had one to show for my efforts, but I also had the thrill of victory and the pride of a well-written scene.

Julie Glover is still a paintball novice but an award-winning author. Her debut novel, a YA contemporary titled SHARING HUNTER, was partly edited during an immersion experience and later finaled in the RWA Golden Heart® contest. Her most recent release is MY SCHOOL’S VAMPIRE, a teen paranormal short story. You can visit her website HERE.

Julie Glover is an award-winning author of young adult and mystery fiction. Her debut Sharing Hunter placed in several contests, including the much-touted RWA® Golden Heart® YA. Her follow-up, Daring Charlotte, also a repeat contest finalist, releases later this year. She has also co-authored four supernatural suspense novels and a short story in the Muse Island series under her pen name Jules Lynn. She is represented by Louise Fury of The Bent Agency.

Julie holds a master’s degree in counseling, has taught conference workshops and online courses, and served as a host of the Writers in the Storm blog, a top 100 website for writers, for three years. In addition, she has served as sidekick and substitute host for Cruising Writers, an incomparable at-sea writers’ experience, since 2015.

She lives in Texas with her hottie husband, her loquacious cat, and her large collection of cowgirl boots.